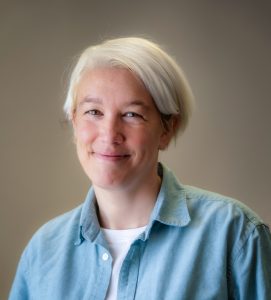 I pull into the Villa Verde parking lot after passing through Lowry and coming very close to the future Park Hill Campus, or the former Johnson & Wales Denver campus.

Villa Verde sits just tucked off East Colfax Avenue, in an area dense with multi-unit housing developments. I see Maggie standing in the courtyard, but by the time I park and get out of my vehicle she’s in her office.

We sit down at her desk, which is an ironically formal setting given her very down-to-earth nature. I felt, at first, like I was sitting down with a boss for an important ask but am immediately disarmed when Maggie cracks an introductory joke, as she’s accustomed to.

It was my first time to Villa Verde, but I knew we had a very high refugee population there. We began by touching on the main languages spoken by our residents, to which Maggie quickly responded, “Burmese, Arabic, and French.”

It was impressive that she was at the ready with a quick assessment of languages spoken amongst her residents, but then it became obvious that she was very well versed with language. She informed me that she was starting to be able to speak just enough of some of these languages to at least know what is being asked.

As someone who took a foreign language all the way through university, I understood the difficulty in picking up new languages.

“Wow, have you always been interested in language, or how did that come about?” I asked.

“I think my childhood shaped me a lot. Growing up in DC early on, a lot of my classmates were a part of foreign diplomat families, so I 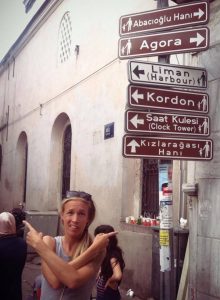 knew a lot of kids from different cultures. My grandpa also had a job with a lot of international travel, so it was a normal understanding that there were many perspectives outside of my own and it created that interest to explore and get to know people and places outside of what I was used to.”

“Yeah, I hear you’re quite the international traveler, right? Not just to visit, but actually living overseas?” She flashed a playful look at my saying “I hear” as if she was flattered to be the subject matter passing through the grapevine.

“Yes, I did live in a couple of different countries and have traveled to even more. I love to experience how different cultures interact, both the good and bad. While I did grow up with many cultures around me, I wasn’t necessarily raised in a family environment that was culturally interested or engaged. It’s really important to me now to acknowledge and celebrate different cultures and perspectives.

I finished up college in New York and one of my friends, rather than a graduation gift, offered a job opportunity instead. Which I guess is a gift of sorts when you’re a broke college grad. But it was on the 63rd floor of the Empire State Building.” 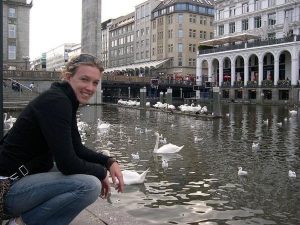 “Wow,” I said, “I’m reacting as if you’ve said you know a famous person! What were you doing on the ‘63rd floor of the Empire State Building?’”

“I was writing cultural curriculums, essentially.” It seemed like one thing after another led down a path of language, culture, and crossing barriers. I was loving getting to know more.

“So, what took you to Germany?” I asked.

“I had the opportunity to live and work on a work visa for a few years. I was teaching ESL courses there and really enjoyed it.”

“Did you learn the language over that time?”

“There was a pretty big culture shock when I got out there and a big part of it was the language. Once I began to speak the language things got a lot easier.

Maggie moved to Ireland afterward and we talk about some of the nuances there. Before long she was back in the States, but this time in LA.

Growth in a New Home

“I loved my job in LA. I was there for 11 years.” Maggie tells me about her love for surfing and the environment of southern California.

While her work was in the same field of teaching ESL and citizenship classes, Maggie began to take more part in supervisory roles.

“I was really good at being able to create and strategize good procedures. While I liked to teach and execute a curriculum given to me, I had a good ability to see where things maybe have never been implemented or created but should have been. I was able to show colleagues how to do things better, not in an egotistical way, I just have the experience of creating a process or curriculum and mindset to see how to best approach something.”

I always appreciate conversations about the big picture or being able to step back and ask, “how can we do this better?” As the 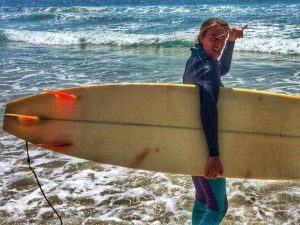 momentum was building in this direction, the pandemic hit and left Maggie furloughed.

“For a second it’s kind of nice having nothing to do, in terms of work, I’m not going to lie.” We laugh. “But, after a while, you need something to do, and I always like to be helping others or involved in something. That’s actually what introduced me to Archway,” she did a little dance at the transition as if we had a surprise emcee introducing the next speaker.

“Hey, look at you smoothly transitioning to the next topic!” I said.

“I know, I should be an interviewer,” she responded.

Archway Resurges a Passion for Helping Others

“So, at first I just signed up on Volunteer Match.” This is a site we use to help us find qualified volunteers to teach or execute specific events, like tutoring or other educational classes.

“I was introduced to Ariel, the Services Manager at the time, and I had listed interest in helping to teach the citizenship and ESL classes. At Archway, Ariel said the classes had been moved to an online, or virtual, setting, so it was perfect for me. I could help from out in LA. 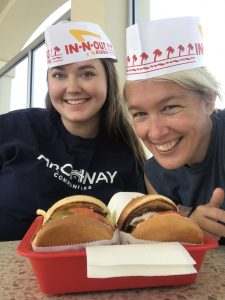 “I was really starting to like helping out and getting to know more about Archway. Ariel had mentioned that there was a Service Coordinator spot open and asked if I would submit my resume. At first, I wondered if I would be able to leave my job in LA, but with so much uncertainty around when things would continue and if I would return in the same capacity, I figured working with Archway was a great opportunity. Plus, I was excited to explore a new place and call it home.”

“And what do you like most about switching to this role? I imagine there are elements that are a lot more in-depth, rather than just specializing in ESL or citizenship classes.”

“Totally, but I really like social work, there’s no set playbook to it or repetition. Each day brings new things, whether they are challenges or wins, the dynamic is ever-changing. That’s how relationships are and working with people. I really enjoy being here for others. And I really enjoy combatting the disparities you see for minorities and refugees.”

In the short amount of time I have worked with Maggie, it is clear that she is a very reliable person. Not just that she is present, but that she positively impacts those around her and the responsibilities in her care. Maggie has stepped in to take over responsibilities far outside her daily routine at Greenleaf, and doing so with grace, expertise, and the standard humor she always brings.

All the while still pursuing sizable goals at Greenleaf.

“I’ve always wanted both sites, Greenleaf and Villa Verde, to be more integrated. They are so close together, and it would be so easy to have events for residents at both places, but it is something that hasn’t been done in the past.

“But this week we had six people at our citizenship class, which is about triple what we normally see. And there were participants from both sites. I started to think, ‘okay, so this is possible. Just keep doing what you’re doing, keep chipping away.’” It made sense to me that there would be this kind of growth and improvement. As a resident, when you have someone who is always there, rain or shine, who exudes nothing but a relentless will to help, I wouldn’t be able to help but respond with trust and a relaxing of my guard.

If there’s one thing I’m sure of, it’s that Greenleaf and Villa Verde will continue to show signs of thriving.

“I’m also excited about the team at Archway. It doesn’t matter whom I’ve spoken to or worked with here, everyone seems to be aligned towards the same goal of helping others and doing good. And for that reason, everything we do aims at providing the most benefit for others. When you’re in an organization that starts to stray in that, it’s hard to stay on board.”

“So, what are some things you like to do for fun? In the line of work you’re in, I imagine it’s important to be able to step away and get a break from the heaviness.”

“I love to paint.” I cracked a smile, Oh? I thought, we have another fellow artist. 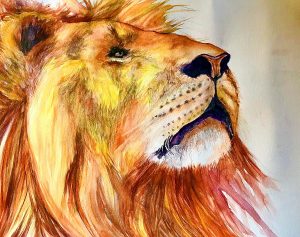 “What is your medium?”

Maggie shows me a few photos of watercolor work she’s done, but also that she has been commissioned to do large mural pieces as well, done in acrylic. Greenleaf has added a mural piece drawn up by Maggie and painted by various residents and Archway team members.

“What was the most difficult piece you were commissioned for?”

“Hmm,” she thought for a moment, looking up at the ceiling, “I would say the ‘Last Supper’ painting I was commissioned to do by this church back in Southern California.”

“Just keeping it light and breezy, huh?” I asked, taken aback that she would come back with The Last Supper as her answer. She laughed.

“Why was it so difficult?” I asked.

“It’s just a very dense scene. There’s a lot going on, a lot of small details from the silverware to the folds in the clothing, let alone that there are so many people present. It was mind-numbing. By the end of it, I stepped back and looked at the finished piece and realized I painted Jesus and the boys with pints instead of wine.”

I burst out laughing.

“So, if that tells you how it went at all. Honestly, makes more sense to me, I’ve always been a beer drinker over wine. Hope the church that hired me falls on the same side of that debate.”