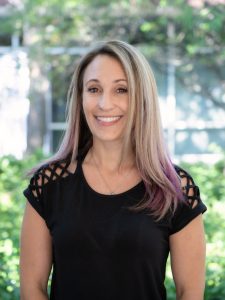 Kristin “Z” Zimmerman was born and raised in Thornton, Colorado and still resides there. The oldest of three, she grew up a tomboy – you could always find her outside with the neighborhood kids riding their bikes to the creek and playing sports.

“I was always the caretaker type. I’m sure being the oldest helps to develop that mentality. But I can remember always wanting to help others or lend a hand.”

I asked how she found her way into accounting down the road. “At first, I just thought it might be a good job opportunity. My mom was actually the one to suggest it. There’s always a need for an accountant, I knew I could count on the job availability.”

Z got her associate’s degree in Accounting and started her first job at 19 years old.

“I worked Accounts Payable for a local communications company,” she says. After a while Z grew to love the accounting field. “If there’s a problem, you can always figure it out and resolve it. The analysis of it is just fun, it’s like a scavenger hunt.”

“That’s so cool,” I responded, “I feel like it’s pretty rare to pick a job field and stick to it because you enjoy it.”

Working With A Non-Profit

“So what inspired you to begin working with Archway, a non-profit?” I asked. “I just got to the point where the job I was in just wasn’t making me feel fulfilled. I wanted to do something that had more meaning. I wanted to work with a company that was truly helping others. That’s how I found Archway.”

It made sense to have that longing for a deeper purpose after hearing Z describe herself as the caring, empathetic type.

“When I was younger I was a single mom. I tirelessly worked two jobs, and I know how hard it is. You feel like you’re never getting ahead. Even with an accounting job, which a lot of people would presume is a ‘good paying’ field, I still needed to work a second job.

“And how easily people stereotype you just simply for needing help. I would have been so grateful for some of the resources we offer our residents. So I wanted to be able to work with an organization that was on the side of helping. It’s really fulfilling working on projects from beginning to end, seeing them come to fruition. And for me to be able to play even a small role in something so life-changing – I love what I do.”

Z tells me how positively her grandparents influenced her when it came to helping others.

“They owned many homes in the Denver area and rented them out. I remember they always charged well under the market rate just to help those who lived in their home.

“They could have easily charged market-rate and no one would have thought anything about it, but they wanted to help the residents in their homes get ahead. I always thought that was admirable to put the well-being of others over their own profits, even when it wasn’t in the wrong to put profit first. 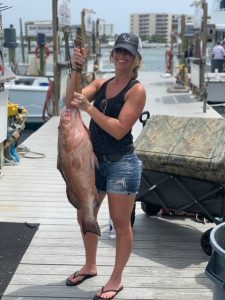 Now Z’s daughter is 15 years old and in high school, and she has an 8-year-old stepson with her partner.

“What do you guys like to do as a family? Are you still the outdoorswoman?” I asked. “Oh, yes, we love getting outside still. Fishing is definitely the favorite activity, but we love hiking and camping as well. Anything we can do outdoors when the weather is nice.”

Z tells me about their annual family trip to Destin, Florida. One of the highlights of the trip is the deep-sea fishing day. “One year we went I caught a Wahoo, which is apparently super hard to catch and expensive, according to the ship captain,” she says. The only Wahoo I’ve heard of is the fish taco shop in Southern California, which up to now I didn’t know where the name came from. It all made sense after this conversation.

“To this day it is the biggest fish I’ve ever caught. The captain said it was the biggest Wahoo he’s ever seen. I could barely hold it up on the deck to get the picture.”

Aside from the outdoor activity, Z loves going to the gym and generally being active. “I’ve always been that way,” she says, “It just makes me feel better to start my day with some form of activity or exercise. It’s what keeps me feeling refreshed and excited for the day.”

That’s the presence that Z continues to bring to the office – excited to help, a fresh slate to learn, and ready to grow. She truly is a pivotal part of this team!