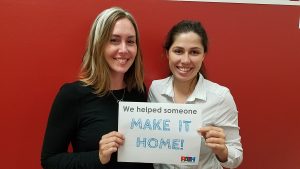 “I actually started out in Journalism,” Georgeanne says as we settle into some chairs in our corporate office.

“That’s cool! Did you just have a passion for the craft?” I asked, interested in how her career path has evolved to where she is now.

“I remember always having the thought or idea with journalism that I could ‘make a difference through my writing.’ So, I think I’ve always had that sort of underlying notion of wanting to contribute to making the world a better place, and at that time the most intriguing outlet for me was in the journalism field.” Georgeanne grew up in southern Arizona, attended college in the same state and found her first job in journalism. It was a fairly seamless start to her working career. It seemed to me that, given enough time, she very well could have found that purpose-filled position within the journalism field.

“I got a job out of college as an editor, and I really did like the company and the people I worked with. It was more of a style publication – articles on ‘so-and-so’s interior décor’, so not quite the ‘change agent’ realm, but I still liked editing. The problem was I got started in the field right as the recession hit in 2008. The publication industry took a huge hit and it was notoriously not the time to be in the business. There were layoffs like crazy. Fortunately, my boss was willing to make some rearrangements to keep me on staff, but they were going to have to do so by changing my position to ad sales.”

“I hated it,” we both laugh, familiar with times where the work we did that had no alignment with our passions and skillsets. “It’s not that there’s anything wrong with ad sales, but particularly during a time where businesses, especially small businesses, were struggling to make ends meet, I found it difficult to be responsible for selling a product that I wasn’t sure would make a difference for the businesses buying. I was working with real people, who had poured their heart into real small businesses that would face real consequences during a financial crisis like that. So I wanted to be able to help in a real way.”

A New Field in a New Landscape

“I was lucky enough to have a couple of non-profits on my client list towards the end of my time doing ad sales. Through those connections I found myself working with the Ronald McDonald House in the Communications and Development department. It was a really cool experience and was the first place where I discovered that I had a passion for this type of role. I realized that I could use my skillsets in a setting where I was responsible for telling stories of change and positive impact to others; sharing about organizations doing good that I believed in.”

But just as the two of us were about to get carried away on the impact of her time at Ronald McDonald House, Georgeanne shares that a couple of moves to other states came up swiftly. Her husband’s work required them to move to Hawaii first, and it took a lot out of me to not hunker down in the tropics and talk all about her time there. It seems like soon after they had to move to Los Angeles, where they would call home for many years to come.

“I got a job working in communications for a non-profit serving foster youth experiencing homelessness. It was less about me seeking out this specific job and more so about simply finding a job. This one just happened to be available at the time. But I fell in love with the work.” I, too, was very interested in the organization, yet I don’t have any kids or a family mindset. But something about foster youth experiencing homelessness really ached my heart.

Georgeanne briefly spoke of a couple of highlight stories as it related to making a difference – a young man who aged out of foster care who crossed paths with the organization and later worked for the organization. “I think it’s just the fact that this is a stage in life that we all view as having the most excitement and potential; when we ‘have our whole life in front of us,’ so to speak and should be following our dreams. For us to imagine that being taken away from a child simply because they didn’t have the support system for it, something out of their control, I think we all feel a pull to help.

Growth for Georgeanne in the Housing Industry

It was so captivating to see such an ease and calmness, yet perseverance in Georgeanne’s spirit. We were 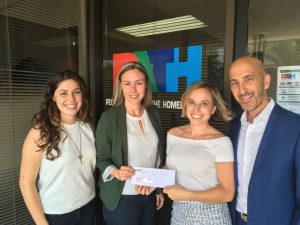 spanning the past decade of work, all deeply involved in organizations that face difficult and persistent social problems, albeit making a world of admirable difference. I would imagine it takes a toll on a person’s outlook, yet Georgeanne spoke of the work these organizations did with a lightness and readiness, as if she was ever-refreshed to take on the next day.

And she would need to as she transitioned into working for PATH – an organization spanning the state of California that provides permanent housing for people experiencing homelessness as well as the services needed to help them maintain their home and life stability. This is where Georgeanne settled before joining Archway. She held a supervisory position, overseeing departments that handled private giving, events, volunteers and communications.

“At the heart of it all I like being able to tell the story of great organizations doing great things for real lives. Even though the skillset has grown over the years and I find myself doing many different tasks on different teams, at the core that is what I really enjoy.”

Transitioning to Archway, Ready for the Future

It seemed like a very smooth transition to join our team here as the Director of Philanthropy. I wondered what motivated the change. “Archway has so much growth on the horizon. The leadership here has such a willingness to expand and improve. There are so many things, from a fundraising and story telling perspective, that we haven’t yet leveraged or developed. It’s fun to be able to bring your ideas and really feel like you are helping.”

I asked her for some of the takeaways from her work experience, which was no small question. But she responded swiftly, “It is essential to get to know others and understand their context and story. When I was in LA, I was shocked at the number of people who were experiencing homelessness simply because of a couple of unfortunate, commonplace events. It made me realize how easy homelessness can occur and how lucky I was to have a support system to protect me. Not everybody has that. Similarly, at Archway our residents are incredible people whose stories vary greatly. Each community has its own identity and make up of residents.

“It’s easy to stereotype and generalize someone, but I found that often stereotypes rarely fit the circumstances of many people we serve.”