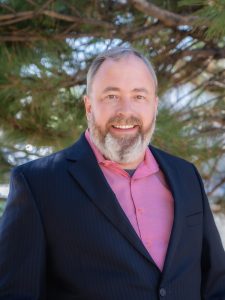 This month we feature one of our fearless leaders, George Kelly! It is never a dull moment when speaking with George. To this day I’m not sure how he has enough time and energy in a day to be on as many meetings as I see him in while contributing both thoughtfully and humorously during each.

It was no different for our meeting! I asked George what some of his natural skills are or things that he has always been drawn to. “Do you have an affinity for anything personally or professionally? As simple as ‘talking to others’ or as complex as ‘astrophysics.’”

George strokes his beard and looks off-screen to think, a staple move of his. “You know, I’ve always been drawn to technology even when I was small, it was both an interest and aptitude. I have more of a logical mindset and that pairs well with the mechanical side of technology.”

George tells me when he was young the interest was most likely sparked by the simple fact of technology being shiny and cool looking – a new thing. But it developed over the years into a viable career path.

“I enlisted in the US Army out of high school and served 4 years active duty and then 7 years with the Pennsylvania National Guard.”

George also began studying Electrical and Computer Engineering. While he expected he would go the route of Electrical Engineering, his natural skill set and interest in computers would lead him differently.

“I got a job doing CAD drafting and, to be honest, I wasn’t really enjoying it. It was pretty boring for me. Yet, unrelated to that, I was finding myself becoming the go-to guy for computer issues with the company. It was something that I liked and was good at so that led me to a career mostly in tech.”

George listed off a few of the jobs he’s had including working on a Navy aircraft carrier doing computer networking. He explains that networking is like the “plumbing of construction.” He was responsible for building the systems and structures internally and externally. This is different from software design which, to stay in line with the analogy, would be more like the architecture or interior design of construction.

Once George got to the executive level his projects crossed paths with finance, beginning a shift towards finance executive roles. “I was implementing large financial systems with big companies through mergers. Obviously, when multiple companies merge there’s a lot to figure out in terms of getting everything on the same page. It was my job to get systems in place that would help that merging go as smoothly as possible.”

It was a great opportunity not just to learn about the financial side of companies, which would obviously serve him in later financial executive roles, but also to learn about company culture and team dynamics. When pursuing a merger, it’s important to get to know the companies you may bring in – do they have good leadership and company dynamics? What are they doing well and where could they improve? Are they a good fit with our company?

“I enjoy being a part of creating growth in an organization. I like believing in culture and evangelizing it to others. It’s important to feel like you are a part of something.”

“So why a non-profit for you?” I asked him. He started by saying that he wrote his master’s capstone on the benefit and good that comes with non-profit work, advocating for the creation of more non-profit organizations. I told him to dig it up and we can post it as the staff spotlight instead!

“I have always had a heart for others,” George begins, “I mean, if you can come to work with a mission of helping others and you can still pay the bills, what can be better?”

To put in my two cents, which no one has asked for, but I’ll include anyways – I haven’t ever met someone so approachable as George. He balances understanding others with decisiveness so well, capturing the heart of an issue with active listening while addressing solutions very systematically and thoughtfully.

“When the opportunity with Archway came about it was just the right time for me to transition to something new.”

We begin talking about some of our favorite aspects of Archway and I share a story that contrasts my for-profit work so well with the non-profit work of Archway. While working with a for-profit I had to tell a good-standing, exemplary resident who had lived with us for 8 years that I couldn’t replace her carpet (which only has a 5-year lifespan) because it would cost too much money to do it while she lived in the unit instead of while it was vacant.

Yet, less than a year later working with Archway, we replaced the carpet in a family’s unit at Arapahoe Green and laid in vinyl because it was most beneficial to their needs. George spearheaded this project using the simple criteria of “will it improve the well-being of our residents?”

“The thing about it is, the company you worked with was making the right decision based on the fact that they are most concerned with profit,” George said in response to my story, “But that’s not our biggest concern. That’s why I like working with Archway. I’ve worked with many for-profits and was sick of always putting the ‘bottom line’ ahead of everything else. I want to put people first.”

I transition to ask George what he likes to do outside of work, to which it seems the heart of his hobbies is being around others that he loves. He enjoys cooking at home for others as well as dining out with friends and family.

“Anytime I can get to spend time with my wife, my kids, and my friends I’m happy,” he told me. This also includes gaming with his kids, which he very plainly stated, ‘I win everything,” when I asked if he wins or the kids.

It turns out the logical mindset and background in networking computer systems play into being handy in general. George tells me that he finds himself knocking off items on the home-improvement list when he gets the chance. But that comes second to cooking with friends and family, and apparently to claiming bragging rights on the family video games of choice!