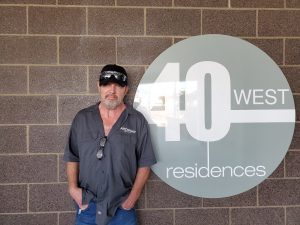 We carry a disassembled planter box made from fence post wood into Darin’s maintenance workroom at the Flats.

“I was thinking we could reassemble this into a smaller, balcony-hanging planter box.” I heard that Darin was a fan of woodworking, so I figured it’d be fun to get to know him over a project that was in his wheelhouse.

“Yeah, cool! I think we can get that done.” I’m fortunate to have worked with Darin on the property management side of 40 West and Flats. He is one of the most steady people I’ve ever met, seemingly never outwardly overwhelmed and always willing to do whatever is needed for residents.

As we set up in his work room I try to get an extra look around his environment. It dawns on me that as a property manager I rarely saw Darin, and things were always getting done. He’s the unsung backbone of the operation, but now I was getting the chance to see where it all takes place.

Darin gets out various tools ahead of time to help with the job: triangle ruler, carpenter pencil, circular saw, drill, hammer and can’t forget the safety glasses (he made an extra trip for these)! We determine the size we’re going for on the planter box and begin measuring wood. As usual, Darin has few questions and works efficiently.

An Eye for Building and Creating

“So how did you get into this line of work?” I asked as he placed the triangle ruler at the needed length and draws the line through. 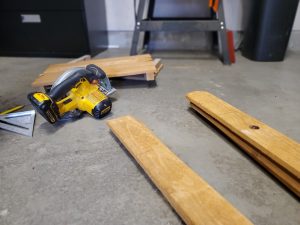 “At first I just started learning how to fix things around our place because I couldn’t afford to have someone come out and fix them.” He grabs the measured wood that I was working on and the circular saw to begin cutting it down.

“Did that just sort of seamlessly turn into a job?” I asked.

“Yeah, exactly. I think my first job was actually dishwashing, but whose wasn’t.” We laughed and I told him how my first job was at the roller skating rink my dad owned growing up. “I worked the skate rack, handing out stinky skates and disinfecting them when they came back. I feel like it’s a very similar role as dishwashing.”

Darin begins cutting the wood for the siding of the box. I begin arranging the cut wood to be assembled.

“But it seems like you’re a pretty creative guy anyways, right?” I asked him, hearing about his interest in various artistic disciplines.

“Yeah, I mean I always had to be doing something with my hands. I’ve always built things and enjoyed putting things together.” He tells me about a job that he used to have growing up in Arvada at the truck topper supplier. One of the add-ons customers could purchase with a pickup truck topper was a wooden shelving unit to laid down in the bed of the truck. They had various templates of shelves and compartments, and Darin was one of the guys that assembled these.

“And I understand you still like woodworking in your free time, right?” I asked, handing fence posts over as he drilled them into the frame.

We take a break so that Darin can show me some of the wood projects he had done in the past. He built his wife and daughter jewelry boxes, one round with a dark finish; the other made out of tiger wood, a dense and valuable wood. 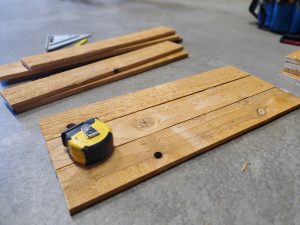 Then he flips to another project – an acrylic, abstract painting framed in a light wooden frame that he made.

“Wow, just a jack of all trades!” I said as he begins to share more on his style in painting.

“I like more of the abstract work, using vibrant colors and creating cool textures.” As we talk more about painting, he talks about how it relaxes him. “Especially after losing my wife last year, it has really just been an escape. That has been the hardest thing I’ve ever gone through. We had been through so much together, and when you’re so used to having someone woven into every part of your life, it’s so difficult to adjust.”

As much as we spent our time talking about all the creative endeavors that mark Darin’s personality, the underlying tone to me was his desire to care for and tend to things. He told me early on that he spent a short period of his young life out in Nebraska simply to help his grandmother take care of his grandfather, who was towards the end of his life. As we spoke later about his family and his job with Archway, it was clear to me, if not indirect, that Darin takes pride and finds fulfillment in making sure people are cared for. Though there may have been periods where he was more “worried about himself” as he put it, this seems to be an underlying theme that has always been a part of who he is.

We start to talk more about Darin’s family. He tells me he and his wife had been together since high school but not without their share of hard times and dark moments. The pair had struggled with drug addiction through the course of their lives together. 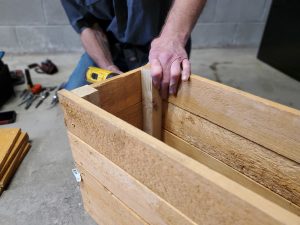 “At one point we lost custody of our two younger children to my oldest daughter, who was an adult at the time. We were messing up so much.” He didn’t specify, but it seemed like this was the turning point for Darin, everything he talked about after that point he was clean.

I remembered that just a few months ago he told us about a coffee date with his oldest daughter, and I asked him now if his relationships with his kids had grown and mended at all.

“Yeah, I stay close with all of them,” he says. We pause to discuss and measure out some reinforcements for the almost assembled planter box. It is inspiring to me to see how steady Darin has become. You can always rely on him to be there and to get things done. He always shows up, he rarely asks questions and he puts in his full effort.

“So then how did you get the job here with Archway?”

“At first it was really just an available job where the timing was right. The company I was working with closed down their business on short notice. I knew Rose, who was already working here, and she let me know that Archway was hiring maintenance techs. I applied and got the job.”

“What have been some of the highlights working here? Or, what keeps you working with Archway?” 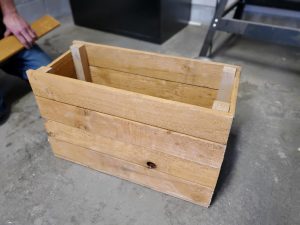 “It’s all about the residents for me,” Darin says, “they are who we’re here to serve. It seems like Archway actually cares about that too. Plenty of companies are just concerned about their rents, or about their building. But in reality these residents are the ones who need the lending hand and compassion.”

We place the final reinforcing pieces and begin to secure them with nails. “Is that your motivation then when you come to work,” I ask him.

“I just want to be someone who cares and who will do something for these residents. I’ve been the guy struggling to get by, struggling with drug addiction, I know what it’s like. Not that that’s the same story for everyone here but we do see it in this area, and I just want to be able to help.”

We place the finished product on the worktable and admire our work! I help Darin put some tools away and tell him I’ll send him a picture of the finished product, flowers and all. I pack up my truck and get ready to leave and see Darin slip back into the maintenance room, resuming his same stealthy and effective demeanor; the unsung backbone of the operation at Flats and 40 West.