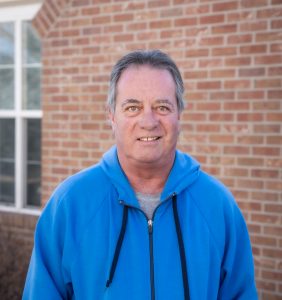 Jeff and I sit down in the community room at Arapahoe Green. There are two white lounge chairs next to each other that we choose. Jeff’s chair comes with a little panda stuffed animal atop one of the arms which he places his hand on for the remainder of our time.

“So, where are you from originally?” I asked.

He tells me the schools he went to growing up and how in high school he began going to trade school for plumbing.

“My dad was a pipefitter, so my brother and I followed in his footsteps with it.”

“Did you guys find work together as well once you completed schooling?”

“Oh yeah, we worked on projects all over Denver. We did lots of new builds, homes, and multifamily properties.”

“Those must be big projects, new builds. You’re having to decide where everything goes and assemble it all, right?”

“Yeah, they were big projects but it was always consistent. It was the same process for each, so after a while, I wanted to do something more.”

Moving to the Maintenance Field

“He hired me to help with the plumbing fixes but when he saw I could do other tasks well he began to train me for general maintenance.”

“What did you like better about maintenance?” I asked.

“Well, you just never know what you’re getting with maintenance. When I was plumbing, and for a short time welding, the projects were all the same it seemed. I liked that, with maintenance, it’s always something different when you showed up.”

“I worked a number of different places from there, from apartment complexes to hotels, before getting the job at Archway in 2013.” Jeff tells me about the various certifications he received over the years in maintenance. He is a Certified Pool Operator (CPO), which is a particularly tricky certification to get. At another time he got his CAMT (Certified Apartment Maintenance Technician) and HVAC Certification. It was clear he was dedicated to being the best he could be at his job.

Finding a Home at Archway

It took a little time before the job opportunity at Willow Green came up and Jeff was able to begin working for Archway. He had visited Cornerstone long before when a janitorial position opened up but didn’t end up accepting a job until the maintenance position opened up in Arvada.

“What prompted you to come work with Archway?” I asked.

“You know, funny enough, one of the big attractions to me was not having to maintain a pool. They are fun for the residents but they are an awful lot of work to keep in top condition. They’re tedious and require a lot of attention. I was excited at the idea of not having to look after a pool or hot tub.”

We laugh at the simplicity of it – sometimes it is the simplest things that lead to a good thing for the long haul.

“Well, what are some things that have kept you at Archway? What things still excite you about your job?” I asked.

“I love working with the people,” he said. “You get to know them so quickly. You know, I’m just the guy trying to do everything I can to help them. I want to please people, I want to get things done right the first time. Before you know it you’re like best buds. I have people all the time saying, ‘I want Jeff. No, not the other guy, send Jeff over.’”

It’s easy to tell when someone genuinely cares and is concerned. Jeff tells me about how important it is to him to ask the right questions in order to know what is really going on. He always prefers a resident to be home so he can speak with them and hear what they are experiencing.

“I have to talk to the resident somehow when I go to complete a work order. Otherwise, you walk into the apartment and have trouble pinpointing what the root of the problem is. The worst thing you can do is go in with too little information, not see a problem, and then leave. It sends the completely wrong message to the resident, too. What if that was my home? Would I be okay with that?”

It’s always inspiring to hear how our team prioritizes others and considers others when we do anything. Jeff has always loved fixing things, but more importantly, he’s always been a good communicator and a people person.

It didn’t surprise me that Jeff is a fan of all things outdoors, like many from Colorado.

“I love camping and fishing, and playing golf,” he said when I asked him what he liked to do in his free time.

We talked about some of the places he liked to go, or some of his favorite places. But for Jeff, it’s more about just getting out and enjoying the outdoors, whether near or far.

“I don’t need to drive out to some remote place to go camp. Not that it isn’t fun, but there are plenty of open spaces right around here that have great fishing and aren’t too far. You end up spending most of your day driving when you’re going out. The older you get, the more you say, ‘Nah, it’s not worth it.’ You’ll see.”

We talk about his time playing golf, which seems to be more of the chosen activity to get some quality time spent with his brother, his son, and grandson.

We begin to digress back to work, and we find ourselves talking about the recent holiday party we had at Flats.

“It’s crazy, there are so many new people,” Jeff said, “there’s so few that I recognize from when I started here, and there are so many more on the team. I remember when our ‘corporate office’ was in a house. To see it grow to the team we have now and the leadership, it’s cool to be a part of it.”

It’s a great perspective to hear from Jeff, who has been with Archway through thick and thin. Always reliable, bringing the same great work ethic, and appreciating time past and present.

“There’s a lot of good changes being made, I’m excited to see where things lead,” he says.