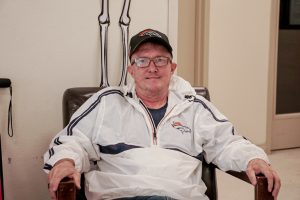 I visit Cornerstone, camera in hand, to capture the magic of another weekly food bank. As I fall into conversation with a couple of residents about my camera and recent events, our Family Service Coordinator, Julie, introduces me to Mike.

Mike has just gotten done having his own food bank of sorts, bringing food to each of the on-site staff for Archway and the St. Francis Center. We take a seat at the puzzle table to get to know him a little more.

Wearing a Broncos hat, mask, and jacket, I ask if he’s a sports fan. As he begins to answer, we’re promptly joined by another resident who was attending the food bank and saw Mike sitting across the room. He joins in talking about the recent Rockies game and the big win the Broncos had over the weekend. I rephrase my question when we get back to our discussion.

“So, you’re the sports guy around here? Everyone comes to you for the updates and post-game chats?”

“Yeah, I mostly just tune in for the Broncos, Rockies, and Nuggets. I’ve got three TVs in my apartment, they’re all tuned into the sports of the week. So, I usually know the outcomes and saw the games play out.”

A Life on the Move

“Are you from Colorado, then? Have you always been a Broncos fan?”

“Originally I’m from Indiana,” Mike says. What proceeds is a rather rapid and hard-to-track procession of places he’s lived after his family moved out of Indiana when he was young. Most of his childhood was then spent in Aurora, where he went to high school.

After high school, however, he’s spent most of his life homeless. He’s been in many of the western states along with a brief stint with his parents, who have since moved to Arizona.

“When you’re homeless, a lot of your life is structured, believe it or not,” he explains. “You know when the various shelters open for meals and for overnight stays, so there’s a good portion of the day where you have certain places you have to be.”

“In between is where you fill your time up. For me, it was always worrying about where my next drink would come from. That’s what I spent my day focused on.”

I had asked him earlier how long he had been living at Cornerstone, to which he responded four years. So, I was curious about what changed that made him want to pursue getting a housing voucher and getting off the streets.

“I had a friend who lived here for a while that I would come to see. Occasionally I would stay the night, you’re not guaranteed a place to stay at the shelters. Every time I left the next morning, I would just think about how he didn’t have to leave. That was his place, he didn’t have to worry about knowing where he was going to be or where he could stay from day to day. It was a constant in his life, and I wanted that.”

“He told me the process he went through with the St. Francis Center to get the voucher and get placed in an apartment. So, I went over there and went through the steps for a place.”

“What are some differences you’ve noticed about having a steady home to live in?” I asked.

“It took a while to see changes, despite having a sense of stability,” he begins, “I was still drinking heavily when I moved in here. Everything I did revolved around where I was getting my next drink.”

“I separated my shoulder falling into the security door here. More recently I messed up both my knee caps. That’s why I walk with a cane.”

“You just get to a rock bottom point, you know? Where you just want something better.” He didn’t share much on the process to get sober, but I imagine it takes a pretty strong support system, between St. Francis case managers and our Archway Staff. I spoke with Cheryl, our property manager at Cornerstone, and she could attest to times where she really had to be there, support, and look out for Mike.

And Mike wasn’t shy about his appreciation for Cheryl and Julie.

“They’re both amazing,” he said, “Cheryl has a sense of understanding and empathy that I’ve never seen before. It’s like she really gets us and gets where we’re at or what we’ve gone through. And Julie is the sweetest person I’ve ever met.”

“In the past, before Archway took over, it was hard sometimes to really get help. For everything, there seemed to be some difficult process. Like when I wanted to move off the second floor, where I originally lived, it was like an impossible ask. But ever since Cheryl got here, it’s like she’s really here to help and do what she can.”

It seems like things really started to take a turn toward the better when Mike moved up to the 5th floor at Cornerstone. He got sober, watched the fireworks at Coor’s Field from his window during baseball season, and settled into the community at Cornerstone.

“I play on my phone a lot now,” he chuckled, “Candy Crush has become a little too addicting, I need to get some of these games off my phone!” We talk about various high scores and games that we’ve both played, it’s a nice moment to see the things he’s worried about now compared to a few years ago.

I noticed Mike was particularly tech-savvy. He had already mentioned his TVs and phone, but he also mentioned the Smart watch he has. I imagine with a secure place to live, not having to worry about bringing all your items with you and keeping them safe, lends itself to a sense of comfort in trying and buying new things.

I asked him what was on the horizon for him; what he is pursuing next.

“I think I’d like to get out of the downtown area, either further out in Denver or near my parents in Arizona. There’s nothing wrong with my place here, but there’s a lot of triggers just stepping out that door.”

“It’s not easy getting somewhere new, I’m on disability now with my knees and have a voucher that’s only for this place. It will take me getting a new voucher to move and if I move to Arizona, I’m not too sure how to go about getting one just yet.”

“That was another way that Cheryl helped me out a lot. She put me on a month-to-month lease so that I had a lot more flexibility to move. When the time comes that I get a new voucher it will be a lot easier to put my notice in here and move out. I know that’s not the most advantageous setup on the property management side, but it brought a lot of relief for me.”

“So in the meantime, it’s watching the Rockies from your window?” I asked.