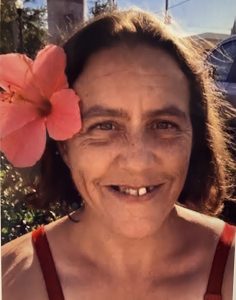 I meet Frankie in Rose’s office at Flats at Two Creek after she takes her smoke break. As always, her bubbly energy fills the room. After briefly catching up, I start to ask her a little more about her story. I realized that while I was working at Flats, I never really got to know about the parts of her life leading up to living there.

Life on her own was a big change for Frankie, which she’s only experienced for a couple of years. For the prior 27 years, she was in a marriage that she felt was controlling and abusive.

“By the time I left and started doing life on my own, it was like I was 5 years old. I never got to make my own decisions, I never got to develop friendships or navigate social settings. I had to learn so much about how the world worked.”

She told me that it was with the help of a neighbor and the encouragement of a friend that got her to leave her ex-husband.

“I never would have thought it was possible to live outside of the power and control of my husband. A friend of mine encouraged me and built me up to where it became a possibility. One day I was talking to my neighbor who had always been friendly, and they said, ‘let’s go, we’re packing your bag and you’re leaving. You can stay with me until we can get you somewhere.’”

At that moment I was taken aback at how the whole event took place – reliant on the timing of people around her to make it happen. But as we spoke more it became clear that community was everything for Frankie, through thick and thin.

“I had been an addict with my husband for our entire marriage – crack was the drug of choice.” She told me about how it resulted in her losing all of her teeth. “When I started to get relationships in my life that I valued – people that cared for me – I wanted to quit, I wanted something better. I prayed to God to help me quit because I knew I would never be able to do it myself with how long it had been a part of my life. And I’ve never done it since.”

“Jesus is everything for me, now. My faith in him is at the heart of everything that’s happened.”

“I didn’t think there was any way I could live here, I was still on unemployment, so I didn’t think I could live anywhere on that kind of income. But Ashley, the manager at the time, helped me get approved and get a housing voucher. I was so happy when I moved in, I was finally by myself with my own space.”

I asked her what some of the changes were like, having such a stark change in lifestyle.

“Well, like I said, it was like I was 5 years old when I got out on my own. A lot of the time it was a good thing, but it’s hard to become completely independent after having spent so much time being told every move you were allowed to make. I was in a shelter briefly after staying with my neighbor. They helped me to grow a lot and start to be comfortable living on my own and taking care of myself.

“One of the big things that I remember was keeping the house clean. When I first moved in here, I had these ingrained reactions to things being left out or getting spilled. I was so used to being punished for those things. I remember for a while when I would purposefully leave things on the floor or counters and think ‘this is my place, I can leave it like that if I want!’ It was so freeing and empowering.”

She talked about getting to go do the things she wanted. She’s always loved to travel and see different places, even if they aren’t halfway around the world.

“I finally have the friends around me who help me do those things. I can do anything I want!”

“But I’m learning a lot about having boundaries, too. If there are things or people in my life that aren’t good, I walk away from them. One of my friends has really helped me to see that it just isn’t worth it to keep those things in your life if they aren’t contributing positively.”

Family and Friends to Get Through Hard Times

“You have a daughter, correct?” I asked, “how often do you get to see her?” Frankie’s face lit up at the mention of her daughter.

“Yes, her name is Scout. My ex-husband has full custody and lets me have visits with her.” I knew, from my time working at Flats, that the amount of time Frankie got to spend with Scout had changed quite a bit.

“I love having her with me, and she loves being around here. She’s met Rose and Emily. Right now, I’m trying to work on really controlling my emotions and energy to be more steady for her. She’s young enough that my mood and emotions have a big effect on her.”

Emily, the coordinator at Flats, was in the room with us and Frankie asked her to chime in on how much they were working on this.

“We’ve talked a lot about steadying emotions and having certain activities that can bring her back to a good ‘home base.’ We’re also working on pursuing things in Frankie’s life that are good for her and being aware of things that aren’t so we can establish good boundaries.”

It got me thinking of a few moments before when Frankie said it was like she was 5 years old when she left her marriage. Being able to have a good handle on your mood and how external factors affect you is a difficult task. Especially when you have a child around you that relies on your control of the environment for their sake, it becomes more important.

“How do you persevere through difficult things like this in your life? I imagine it’s hard to try to learn so much at once and then have to deal with letdowns like getting time spent with your daughter reduced?”

“I’ve definitely had ups and downs. One time, back when I was working with Kaiser’s Call Center and Customer Service, I went over to the desk of one of my coworkers and pretty much said ‘I don’t think I can do this anymore.’ Rather than being alarmed and reacting poorly, she just said, ‘It’s okay, we got this. We’re going to take this one step at a time and I’m going to be there each step of the way.’ We are still good friends to this day.”

She told me about a number of instances where having people who care for her made all the difference. Frankie has a great community of people who will sit in the trenches with her, listen, and be there. Whether it is a comforting heart-to-heart or just getting out on an adventure to take her mind off of things, community has been a key part of her life.

“I also talk to my mom a lot,” she says. Her mom passed away years ago, but she believes through prayer and mediums that her mom still guides her and gives timely advice.

“She’s my guardian angel, and that is a very comforting thing for me every day. It’s like I’m never going through anything alone.”

There were a number of times where Frankie would start a sentence with, “My mom told me,” in regards to her providing guiding influence and advice to Frankie after her death. I could feel the sense of comfort her mom’s presence has for her.

It was inspiring to hear about this ecosystem of people and relationships that existed around Frankie and how much that impacted her outlook and ability to grow and be better. From leaving toxic situations, quitting harmful drug habits, all the way to pursuing steady work and boundaries that will help her thrive, Frankie has had so many formative moments with friends and resources at her side.

“I have so much to be thankful for with Rose and Emily, too. I’m finally getting caught up on my rent with some of the rental assistance resources that they’ve helped with. And they create a place that I’m excited to be. I love living here knowing that they are here for us.”

I could tell that Frankie has a lot of visits with Emily and was impressed with how in tune Emily was with where Frankie was at. She could so quickly speak to their activities together and what the contribution was to Frankie’s independence.

“I feel like I’m really growing as a person. When I first left my marriage, I felt like I needed someone new there to go on, like I couldn’t do things on my own. But I know now that I don’t need someone to make me feel complete or capable.”

“That’s incredible!” I responded, “So what are looking forward to? What are some of your goals moving forward?”