A passion for art grows in prison 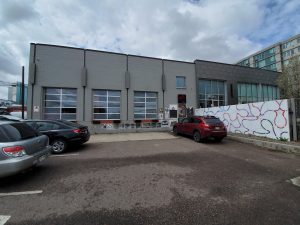 hway’s Cornerstone residence) he tells me that his passion for art began in prison. “It was a way for me to stay out of trouble,” he says, “it kept me away from gangs and violence inside and was extremely therapeutic.”

Gonzo gravitates towards activities that he calls “therapeutic” or a way for him to relieve stress and take a step back in life. It gives him a chance to clear his head and grow as an individual. “I see so many people with dysfunctions. Not in a bad way, they just don’t take the time to look inward or create a good outlet for themselves. They chase negative habits. Art for me relieves stress, it creates self-awareness, and fosters a sense of gratitude. I just want to be able to take what I have around me and inspire others.”

Homelessness fosters a style of resourcefulness

“Once I got out of prison I was in and out of homeless shelters, I even had a tent pitched on the same corner you can see here from the roof,” Gonzo points to a street-corner-turned-garden as we stand on the roof of Cornerstone. It’s one block North of the place he’s called home for the last 11 years.

“That was once a big spot for the homeless, there were all sorts of tents there. It has since been turned into the community garden you see there.” During this time Gonzo spent much of his time developing his craft. “In prison I was just doing art to pass the time and stay busy. But once I was out, I really wanted to develop my ability. I wanted to do something with my art. I began using different materials that I would find that had been thrown out or discarded. In prison I did a lot more work in realism, but it was so stressful, I was so focused on making everything perfect. Once I started to experiment more in the abstract – working with different patterns, 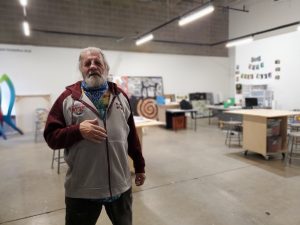 colors and materials – it was much more freeing and relaxing.”

“I would keep the completed work and extra supplies in the big Ziplock bags they gave out at the homeless shelters – you know, the ones with all the supplies in them and hygiene items. People are always throwing those bags away! I always have a backpack with me filled with that stuff,” he points to a black backpack on one of the tables in his studio.

I asked him if he could see a connection from his time spent homeless with his wife to his style now. “I’ve always been resourceful,” he responds, “you wouldn’t believe what you can create with so little. I have a class once a week with kids on the autism spectrum. Last week we worked on creating textures with paint and bubble wrap as well as sticks. It’s amazing the beautiful work you can create, and the kids can see that too.” I looked at some of the work left from the class on the tables and there were some vibrant, beautiful works of art – a mixture of paint textures and collaging.

Cornerstone becomes a step towards stability

“Everything changed when we got into Cornerstone, I’ll tell you that,” Gonzo says as we walk across the alleyway of Redline to the back entrance of Cornerstone Residences. “There was no stability in my life when we were homeless, and this place was the first step towards that. I’m so grateful for this place.”

Gonzo proudly toured me around Cornerstone as if he worked there, and sure enough, everyone we passed had something to say to him and he knew everyone’s name. His art is featured throughout the building. He showed me one colorful piece that had been painted over old architectural drawings that had been thrown out nearby. The conference 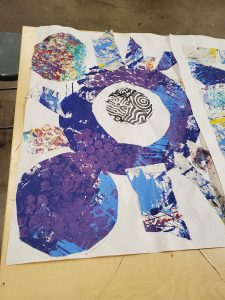 room featured work from a series he did, called “Targets” or pieces that centered around a circular, symmetric shape. He joked that when they were first being hung up, he would mess with people by gasping and saying, “Oh no, it’s upside down!”

Once he and his wife, Michelle, moved into Cornerstone, they got connected with the St. Francis Center located next door. “St. Francis Center now helps us with a large portion of our rent, it’s such a blessing. If I need anything, I can just walk over.” He then explained how Redline Galleries entered the picture. “When I saw Redline located behind Cornerstone I thought, ‘this is what I’ve been looking for!’ When I was developing my style, I wanted to be able to go into a gallery and show my work. I wasn’t sure what that would lead to, but I just wanted to be in a place where I could continue to grow.”

“I had just finished a piece that I did on an old banner that looked like it had been used in a protest or something. I found it discarded. I did a colorful, abstract piece,” he adds in a low voice, “that was really bad, looking back,” he snickers. “They really liked my enthusiasm and started doing art groups over at Cornerstone. After a while though, the attendance dwindled. I was such a steady part of the groups that they asked if I would come take over a studio space and continue to run the classes from Redline. Now I have the keys to the place! It’s such a blessing.” 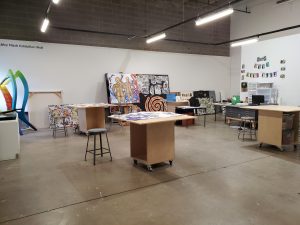 Looking at more of his artwork Gonzo began to explain the most recent development of his style. “I really liked the look of collaging but I didn’t want to use my original pieces to collage. I didn’t want to cut anything up and permanently alter it for the sake of another piece. So, I’ve since become a photo-copying maniac.” I laughed as he opened one of his binders to show me some of the recent pieces he created that featured photocopied work. “I bring $5 every day to the photocopier; you know it’s 10 cents for black and white and 50 cents for color. So, $5 and I’m the happiest guy on earth, it’s like I’m in the casino! And I recently learned how to photocopy on 11×17 paper, which is bigger, but it still costs the same!”

He had pieces that featured photo copied, hieroglyph-style drawings next to a colored pencil shaded portion, but it appeared as though it was shaded on top of something with texture. You could see small circles in a clear pattern imprinted into the shaded areas. I asked him what the texture was, and he said he found an old advertisement that was once on a bus window. “They’re the ads that have the small holes in them so you can still see out the window from the inside but from the outside you mostly just see the advertisement.”

An ecosystem of Inspiration, Convenience, and Love of Art and Family

Gonzo and Michelle have lived at Cornerstone since 2009. He has an environment around him that allows him to do what he loves and inspire others. He’s been teaching art classes in his studio at Redline for 11 years and even teaches other residents about gardening using the rooftop garden at Cornerstone. “When Covid first shut everything down it hit me hard. I was so distraught when they closed the doors to Redline, it was my passion to teach and be in the studio every day. But I had an idea that helped get me through.”

He walked me over to a room in the studio that had roughly 8 large binders all filled with transparent protective sheets filled with art on letter paper. “I’ve been doing binders like this for years. When I complete a piece, it goes in the protective sheet.” The art in each of these binders varied greatly, but all very colorful, mostly painted, and abstract in style. “When Covid hit, I would sit at home watching the news, which was always grave. Then I also had all of these emotions of sadness swirling around and I just decided to paint as a way to release those feelings and encapsulate the news at the time. I dated it at the bottom and thought, ‘hey, I’m going to do this every day, like an art diary.’ So, this binder started in March of 2020, and I tried to have a piece in here for each day of the year.” Each page had 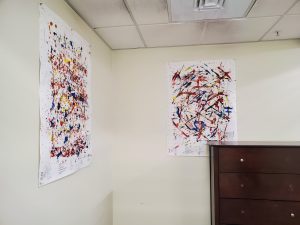 a date at the bottom, there was no caption or explanation of what was going on, just the art that represented Gonzo’s feelings and sentiments at the time.

“Cornerstone helped so much during Quarantine. The amount of food banks increased tremendously so we always had food. When the vaccine came out, they held clinics, so I was vaccinated almost right away. It’s incredible. I know people that still can’t get into a clinic or office to get the vaccine, but that was never a problem for us.”

Now, classes are beginning to resume at a limited capacity and Gonzo will be the first to tell you how grateful and excited he is. “I just want to do the best that I can with what I have. I want to take care of the blessings I’ve been given and try to inspire others the same way. I love all of the people and stories that have come through these doors. I have such a great environment here; I like to call it ‘a convenience.’ I’m surrounded by ‘convenience’, and it makes my life so stable and easy and blessed.”