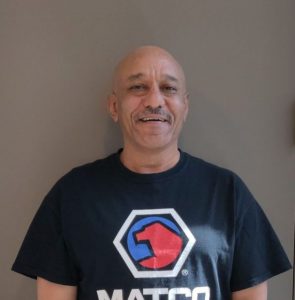 Mark is always bubbly when you see him, and it was no different on this occasion, even through the phone. We check in on how things are going since I used to see him every day at 40 West, Then we get to talking about him!

Mark is endlessly grateful for 40 West and HUD-VASH, both pivotal in helping him to establish consistency and reliability in his life. If there’s one thing that was clear in the time we spoke about his life leading up to living in Lakewood at 40 West, it’s that Mark has experienced countless circumstances all over the US. Maybe the most exemplary of this is his time traveling with a carnival.

By his own admission, it wasn’t a job he wanted, and he didn’t like the lifestyle it created. But he had no other option and stayed on with them traveling around the country, ultimately ending up in Montana where he finally decided he wanted something different.

To have a lifetime of experience with change, heartbreak, and hardship, 40 West offers something completely different. In my time working with Mark, he was one of the most steady and consistent residents I saw. He always stopped by the office to say hi and see how everyone was doing. He even began taking our office pup, Walter, on walks once a week.

Mark is a regular at the food bank – helping to set up and take down – and engages in many of the events put on by DQ, the service coordinator for 40 West.

But what Mark really appreciates, what brings him to tears even talking about it, is the support that comes from the people around him, the relationships with our staff at 40 West. Between DQ, Jessica (Property Manager), and Hilary (HUD-VASH Case Worker), Mark feels like he has the connection and accountability to help him grow and make something better of his life.

“For a majority of my life I was a functional addict,” he tells me. “I don’t like to spend too much time talking about it just because I’m proud of where I am now. But it’s the truth, and it caused a lot of pain and hurt over the years.”

A Hard Worker Set on Achievement

Mark tells me that growing up he had, what he would consider, a privileged childhood. A hard worker, he had his own car and worked through high school, joining the Ohio National Guard to help pay for college and earn his associate’s degree. He did all this while working.

“I was an over-achiever, I always wanted to prove myself or have it all together. There wasn’t one instance I could think of that ‘got me hooked,’ so to speak. It was more so that the more I took on the more I began to use just to cope.” As he continued he retracted his earlier statement, “I should say, actually, the first 20 years of my life I was a functional addict. For the next 20 years, I was not functional.”

He tells me how he had older stepbrothers that ‘had been institutionalized from complications with drug usage.’ At first, he couldn’t understand how anyone could end up in that position. But suddenly one day, he took inventory of his own life and realized he was on the same track.

He began treatment programs to help get him on a different path. But it was difficult to have success with some of the life circumstances around him.

A Life of Trials

Over the course of our conversation, Mark told me about many trials. He was facing, what he would consider, a tough-love approach from his family around his addiction.

“I’ve always had a loving and supportive family, but they were pretty tough love about addiction. It felt like I was facing rejection, and that was very hard given my outlook on life to achieve and please others.”

In his thirties, Mark had a fiancé that died rather suddenly from cancer, which sent him into a spiral. He was using his money for drugs and alcohol to cope, even attempting to take his own life. This was when he began his first round of treatment and upon completion began working for the carnival. Once in Montana, and after leaving the carnival, more trials struck despite things looking up.

On the one hand, he was working with an outreach agency for homeless veterans, attending truck driving school, and living sober. He had met his soulmate who also battled addiction but was sober when they met.

After a while, however, the addiction started to creep back in for his partner, and their relationship crumbled.

“That one hurt the most, she was my everything,” Mark said. The fallout had him struggling to get through once again, and he found himself at rock bottom. Under the influence, attempting to take his life for a second time, Mark survived.

“I ended up in Denver because I was stuck on my way to Texas. I was homeless, sleeping in trap houses, and addicted when I was reconnected with HUD-VASH.” That’s when I was finally able to not just get sober but change the lifestyle around me to see some lasting change.”

A Steady Lifestyle and Bright Future

Mark couldn’t stress enough how much better he is now, even though it’s only been a few years.

I ask him what some of his hobbies are now, or things he likes to do. “I love to get out and walk or ride my bike around Sloan’s Lake. I go to bible study at church down the street and volunteer when I can. I love to cook, too. This is the most stable I’ve been in years.”