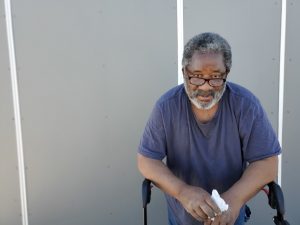 I sat on the rooftop of Flats at Two Creeks, where the garden boxes are located, waiting for Michael and Emily, Flats’ Resident Care Coordinator, to meet me. Emily said that today they would be doing most of the planting for the garden beds. As we rolled the cart full of gardening supplies from the elevator door to the rooftop tables I knew we were in for some serious work!

Michael said he’s always loved gardening. “I grew up in the Midwest- Gary, Indiana- but most of my family is from the south. It’s what we do; my mom taught me about gardening, I always helped her.”

Early Years in the Military 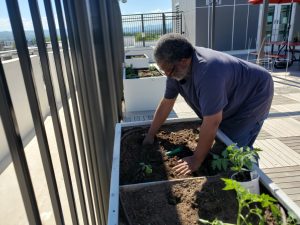 I dug my hands into the compost bag to layer the bottom of where a tomato plant would be placed and asked when Michael joined the military and what his motivation was. “Well, like I said I was in Gary, and I worked at the steel factory. When it closed down, I joined the military to learn a skilled profession, I wanted to improve my character and abilities. The principles I was taught and the jobs I performed helped me later when I got out. I did a lot of remodeling.”

I could tell he had a good sense of methodology to the things he did, the gardening was a great testament to this. The placement of each plant had a reasoning, it wasn’t just an empty box of soil. He rearranged the cucumber plants that had already been planted the week prior, and had great insights to where to place the new ones going in.

“Now don’t press those down too hard, Emily,” he said as Emily pressed dirt in around the seedling, “it’ll never grow.”

“In all honesty, I was running from Gary, that’s how I ended up here,” Michael said with a laugh. He had family in Colorado that drew him here and as far as I could tell this is where he married and had a daughter. Michael never said more words than necessary, but had answers at the ready, with a sense of acceptance and comfort to the parts of his life. This was admirable to me, as the trials began to pile up the more we talked.

“My wife was murdered by a serial killer. He killed 14 in total, I think.” Emily and I were shocked, we had no idea something this devastating was a part of his story.

“My mom helped me so much throughout that. She helped to raise my daughter, who was just two and a half when it happened. It wasn’t that I couldn’t handle raising a child, but I was never going to be able to teach my daughter how to embrace her femininity. My mother was great for that.”

Through everything we discussed he always came back to his family. He had such reverence for his mother, crediting her as his inspiration for being the man he is. He loves his kids, his grandkids and even great grandkids! The first thing I asked him was “what makes you unique,” to which he responded, “I’m a grandfather to 8 grandbabies and a great grandfather to two great grandbabies.” He loves his family, that much is clear. 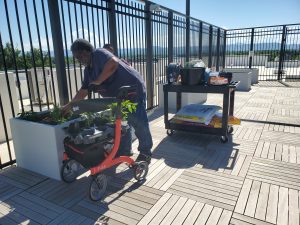 At some point, Michael served time in prison, though it wasn’t specified when amongst all of these life events. But it was followed up by homelessness, eight years to be exact. He shared this when I asked about how he crossed paths with VASH.

“I’m so grateful for VASH, without them I would be on the streets still, no doubt in my mind.” A fellow vet that was also homeless told him about the program, now 12 years ago. “I’m the type that won’t believe it ‘til I see it. So I told him ‘alright, this works out for you and I’ll look into it.’” When his friend received his voucher, Michael began the process to be in the program.

“When you get the voucher, you have 120 days to find housing or they will give your voucher to someone else. I was on the last day of this 120-day period. I just couldn’t find anything up to then. I finally found an apartment community that had availability. I figured it would take days for the approval process, all the paperwork, lease signing, all that before I could get keys. Nope. She gave me keys right then and there, it only took about an hour.”

“I said, ‘is this it? Isn’t it going to take a while?’ She said, ‘No, the place is all yours!’ I was shocked, and certainly wasn’t expecting to have a roof over my head that night. I went into the apartment, all I had was my backpack and my sleeping bag. I laid the sleeping bag on the floor and set my backpack down. I laid on my sleeping bag and just stared at the ceiling. I couldn’t believe I had a place to live.”

Settling in at Archway 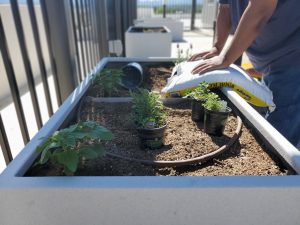 “Do you guys believe the old wives’ tale that getting soil under the fingernails is good for them,” Michael asked as we dug the spaces out for the herbs. Emily and I laughed and went back and forth contemplating this, but the nature of the question I felt was symbolic of his presence. There’s something steady about a wives’ tale like this rooted in years of experience, landing on a hopeful but resolute sense in how things work that you can always fall back on; it’s soothing.

Though I didn’t know much about Michael, the times I had been around him he always had that steady, calming presence. You hear a “Hey, Boss!” every time he walks into the office to talk to Rose, property manager at Flats. He’s quiet, but you can count on his optimistic mood. “I’d like to be here at Flats for a while, 10 years or more,” he says to me as we conclude the day planting corn seeds. Michael has always rented, but it seems never aims to move around. When he moves somewhere, he looks to stay. We’re hoping he stays with Archway for a long time!