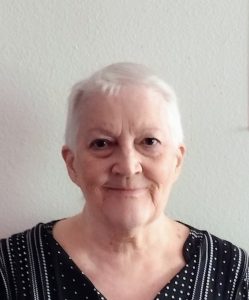 But ever since the COVID-19 pandemic began Becky’s lifestyle has been severely altered. Board meetings became virtual, resident events were canceled, and community spaces were closed in an attempt to protect residents and mitigate the spread of the virus. Add on back issues that made mobility difficult for Becky she found herself not leaving her apartment at all.

When I spoke with Becky she told me about how much she loved going to the board meetings, and that she considered Robb Lapp her best friend and mentor. It seemed to really take a toll on her social life to not get out and see others.

DQ, the supportive services coordinator at 40 West, has also built a great relationship with Becky. Now that resident events are resuming and public spaces are opening up, DQ has helped tremendously to get Becky back to her active life, a goal that has had many hurdles.

Over a year ago, DQ established a partnership on-site at 40 West with InnovAge, an organization committed to helping seniors live life on their terms – by aging in place, in their own homes and communities, for as long as safely possible. They offer an array of services, as basic as scheduling primary care appointments and providing transportation, and as complex as coming alongside patients through major surgeries and physical therapy programs. DQ saw a natural partnership opportunity given the number of seniors at 40 West who may be able to benefit from a holistic approach to healthcare.

Becky was one of the residents who enrolled with InnovAge the first day they came on site to visit residents at 40 West. Since then they have played an integral role in the back surgery Becky needed last year.

“I had already been going up to her apartment every so often to do art or chat and just spend some time,” DQ shared with me, “But we hadn’t gotten as far as getting her down to events or out on resident trips. When she told me she was going to have surgery I told her, ‘when you get back be ready to get up and moving!’”

Becky spent over a month in a healthcare facility doing rehab after surgery, all done through InnovAge. All went successfully, and when she returned to 40 West Becky kept her promise to get back into her social and active life.

“Once she was back I was so proud of her for her determination,” DQ told me. “She was using a walker but made sure to come down so we could go on walks. It started out just around the building, then it was down the block.”

Soon she was making trips. Becky attended the memorial event we held for our founder, Robb Lapp, at the Park Hill Campus. When she heard about Robb’s passing Becky was devastated. When I spoke with her she was brought to tears even mentioning Robb. She wasn’t sure she wanted to attend the event initially. There was the nervousness surrounding her ability to walk around campus, plus the emotions that come with a memorial.

But when she arrived she was unfazed by the walk and in good spirits hearing speakers celebrate the life of Robb! Becky had a blast meeting with new people and seeing the familiar board members.

“I was so excited she came, that was such a big accomplishment,” DQ says.

Now nothing is holding Becky back. When I visited 40 West she was in attendance at the 4th of July barbeque, telling me about going to see Elvis in theaters. There is so much life in her voice and plans in her words. She wants to get back to writing and can’t wait for the next in-person board meeting!