The Importance of Community at Flats at Two Creeks 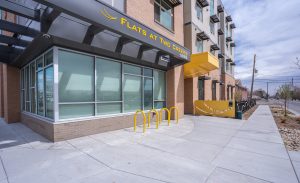 Annie, Supportive Services Coordinator at Flats at Two Creeks, couldn’t be more excited to share about her residents.

“I love them so much, they’ve been so great to work with,” she says. And while her words were genuine, it was easy to see the truth in them through her acute observations of her residents’ growth and connection to one another.

“They make my job so easy because there is already such a great sense of community here.” She tells me about how, on Thanksgiving, about 20 of the residents planned a Friendsgiving together, utilizing two separate apartments across the hall from each other just to be able to fit all the attendees.

“They were walking back and forth with food and utensils, borrowing ingredients and plates,” Annie says, “And this was not anything I planned. They came together and did the whole thing themselves. Even when I do plan events, there is always a resident who wants to do something additional for everyone else.

“Last month I had a resident tell me, ‘I’m bringing breakfast burritos for everyone.’ She came down with her own ingredients and used the community kitchen here to make sure everyone was fed for our resident event.”

We discuss how impactful that sense of human connection is for the residents. When you have a solid foundation of love and support, it gives you the ability to do the hard things in your own life. It gives you the confidence to experience your own independence and self-expression.

“I had one resident that was very guarded when he first moved in and cynical. He didn’t express much joy but, to my surprise, he showed up one day to an event we had going on. It was something simple, and he mostly sat away from everyone else, not speaking to anyone.

“I just kept with him, asking if he needed anything, if he wanted to participate, even if it was small. The residents began trying to include him, even if just through conversation. When he began conversing with other residents I counted it as a big win.

“After that day he slowly became more regular at our events. Each day we would welcome him, and each day he opened up more. Now he comes to every resident event, even volunteering his time to help set up or assist other residents. He is very warm and talkative and has made many friends amongst the residents. He is a joy to be around and is truly delightful.”

It’s a story that Annie thinks epitomizes the importance of genuine human connection. When you come from so much time spent in solitude, when you alone carry the burden of your well-being, or when others have mistreated you, it creates a guard and distrust of others. Not to mention it is an exhausting way of living.

“But when you experience genuine support, love, and community, it chips away at that guard and coldness towards others. The result is a warmth that fills your own heart and overflows to others.”

It makes sense that, in the season of giving and holiday, the same resident has a wreath hanging from his door that he made during a resident event. It is this exact growth that excites Annie and all of us at Archway, it is the reason we come to work every day.