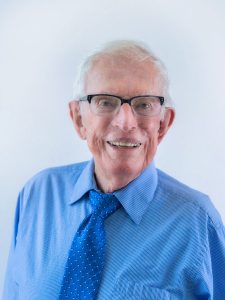 A United Church of Christ Minister, the Rev. Robinson Lapp earned his A.B. from Ohio Wesleyan University in 1954, a B.D. from Chicago Theological Seminary in 1957, and an ST/M from the same seminary in 2017. He started two new congregations of the United Church of Christ in the Denver Metro Area, was the organizing Executive Director of the Metro Denver Fair Housing Center during the height of the Civil Rights Movement of the ‘60’s, and he created and managed the governance and community service agencies for the Title VII New Town of The Woodlands in metro Houston. As an active Denominational Volunteer, when he was approaching retirement age, he and David Nestor, a fellow Archway Board member, formed Rocky Mountain HDC, Inc, Archway Communities’ predecessor, in 1995. He was a Life Trustee of Chicago Theological Seminary and formed several service non-profits for community ministries within the Rocky Mountain Conference of the United Church of Christ.

What Home Means to Me

Now living alone in a senior facility in Arvada, home is the place where I feel physically safe and secure. It inspires me to spend my days working to keep Archway Communities relevant in a world of hurt. Bottom line, my home is a positive haven for creativity and reflection.